What Knives do Kiwi Bushcrafters Use...

What knife do you use out in the Bush?? I've had a few TBH and currently I use a Fallkniven F1. 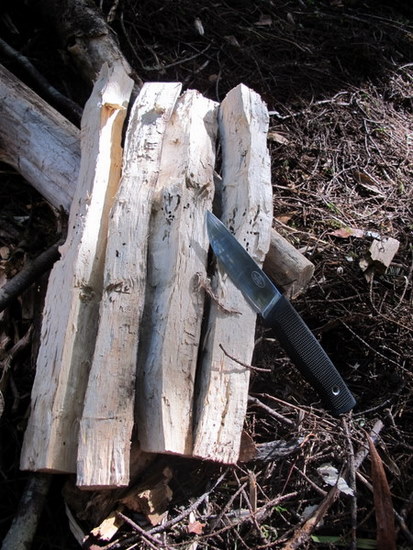 Hi John
I use a Helle Folkekniven. A detail description can be found on this site. You can see it in some pictures I took or a rimu spoon I started on a recent outing (still in progress).

For me its an ideal size, not too big and the with a  solid handle so it still fits well in your hand. It seems to hold and edge extremely well, after a hard day of use (including 2hrs of hardwood whittling) its retained a shaving sharp edge.

Its unusual in that it is a tripe laminated stainless blade with a high carbon core to hold an edge sandwiched between 2 softer layers for strength. All the fancy details don't really matter, why I love this knife is because its comfortable to use and does what I need it to do....cut things well! 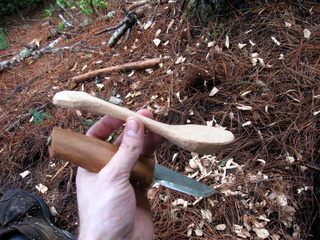 I use it for larger tasks (such as chopping a larger branch) by using it with a baton.

One downside of the stainless blade is that it wont throw a spark with a fragment of flint that I have. It probably would with a swedish firesteel though.

Thanks for the reply..

Yep Helle make some nice knives. I've seen them pop up on Trademe from time to time.

The Fallkniven has a Laminated blade also.

I've also used and had a lot of good use out of a simple 'Mora clipper' which you can get from the tool section at Bunnings they are bright orange and branded Bahco. But they are a very good knife for $15.00 and comfortable to carve with...

ShrafterPermalink Reply by Elrond on July 25, 2010 at 18:33
Enzo Trapper in 01- design by Stuart Mitchell a true craftsman.
handled it myself with some yew 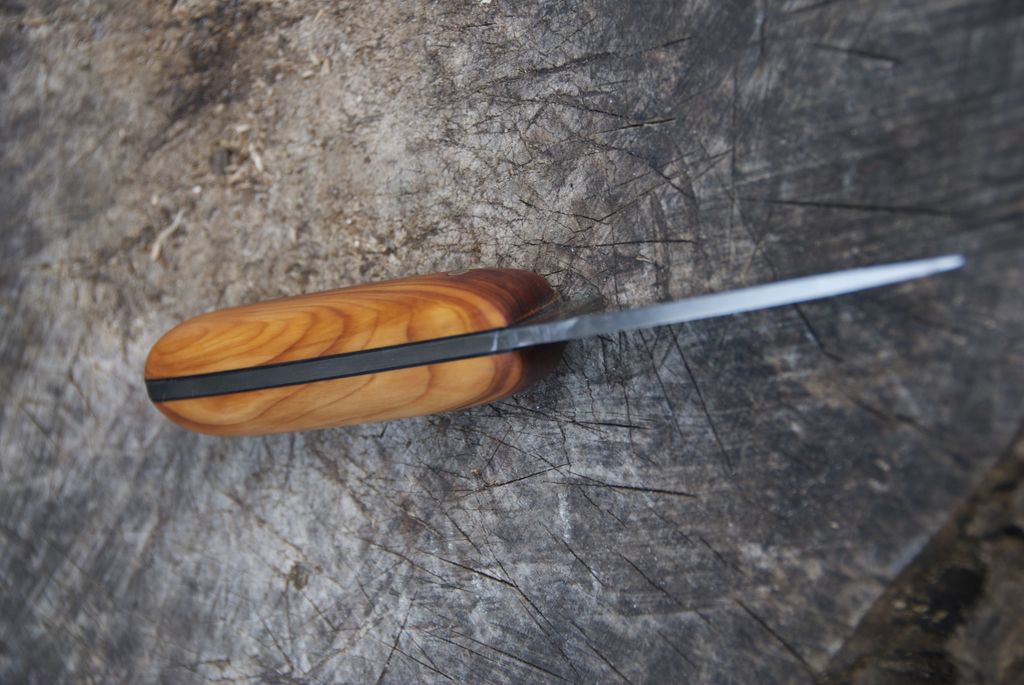 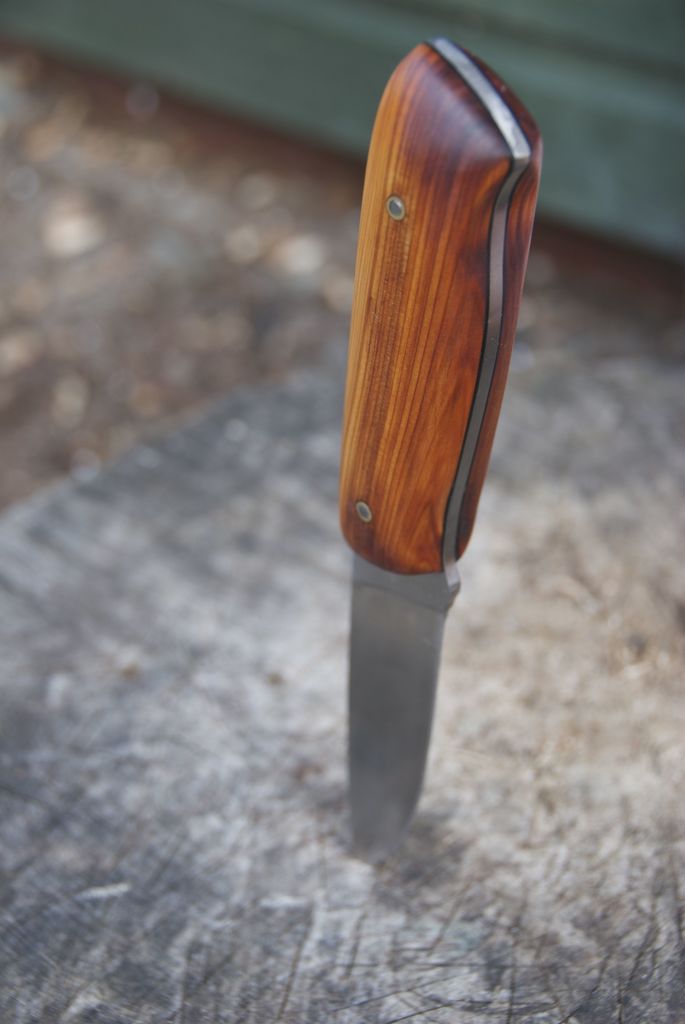 can be bought here
https://www.brisa.fi/portal/index.php?option=com_oscommerce&osM...

I used to have an ever, but its at the bottom of Loch Lomond :-( canoeing accident.
probably gonna ship one over and try to source some swamp kauri for the scales

I trust you are settling into life in NZ..

I've looked at those Enzo kits. I was thinking of making a knife with my oldest son as a bit of a winter project and someone on another forum mentioned them...

Nice to see the photos..

ShrafterPermalink Reply by Elrond on July 26, 2010 at 22:33
great thanks John
good blades, not as nice as some of Stuarts other work, but a good working blade all the same.
i would really recommend going for 01 for a working blade. the d2 is good and holds an edge well, but can be a bugger to sharpen and you will struggle to throw a spark with it.
let me know if you are going to order a kit from Dennis at Brisa and i will split postage with you need a wee winter project too.

ShrafterPermalink Reply by Elrond on July 26, 2010 at 22:36
cheers
its a lot easier to get a good a nice finished project when you are working with wood as good as that.
shame I had to leave the rest of tree back in Scotland when i came to gods own :-)
just need to get off my butt and explore the resources available here.

ShrafterPermalink Reply by Stephen Coote on July 26, 2010 at 22:37
Hmmmm. Nice knives and nice photos thanks.

I don't have just one knife. I have made and purchased dozens of knives over the years.

I also have a Frosts Mora Clipper. If the danged thing had a better sheath I would use it more. I generally just use this for when I might skin and cut up an animal at home.

If I had to grab just one of my current blades to depend on away from civilization, I guess I might take my Bark River Gameskeeper, a 10" Tramontina machete, or maybe a small fixed blade I made from a big circular saw blade.

The Gameskeeper is very nice, but it is a bit thick in the blade for things like butchering and light work. The Tramontina machete seems to be made of marvellous steel, but it is a bit big to be practical for every job.

Here's the Gameskeeper. I won this in a competition on an American website. I haven't won much before, and I was excited to get it.

Here's the Tramontina. The sheath cost me a lot more than the machete itself.

The knife with the light-colored antler handle in the picture below is the one made from the saw blade that I mentioned earlier. I don't use it much nowadays, but it is a good one. Also in this picture are a couple of Cold Steel Bushman knives. The only one I still have is the cut down version. The original was just too big.

Perhaps the Nepalese had the right idea having a khukuri with a small 'karda' knife in the same sheath. I've had four khukuris, but I find I don't use them much now. They could certainly chop and hammer well, but they are heavy and don't ride well on a belt for what I like to do. A while back I experimented making a few different kardas of my own. I kinda like the 'seax' shape of blade for fine work and skinning possums, so I created some unusual hybrids:

I am seldom without a knife nearby. I feel naked without one.

ShrafterPermalink Reply by Scott Hamilton on July 27, 2010 at 22:38
Love the wood scales On the Enzo, they look great, what did you use for scale liners. I use a Frost Mora Carbon Clipper, that I bought in Christchurch, I use these trapping as well, I bought a Sheath from Bens Backwoods with a Firesteel loop, great sheath and good price. I would recommend Bens Backwoods for gear, I found them great.
My new Knife that I am yet to try is a Footprint Hacking Knife, these are knives they used to knock out the putty from around windows, Carbon blade around 100mm blade length, super thick in the spine and they are designed to be hit with Hammers, got it shaving sharp, have awful leather scales for handles but once I try it out and if it works, I will replace with wood scales, and was only $24.50.

TohungaPermalink Reply by Te Hopo on November 6, 2010 at 17:06
I use my Martinii Condor which while more of a hunting knife does a great job and my Victorinox Locksmith which is a great size, hold a nice edge, locks the blade and has some other handy functional tools such as a file and a saw. 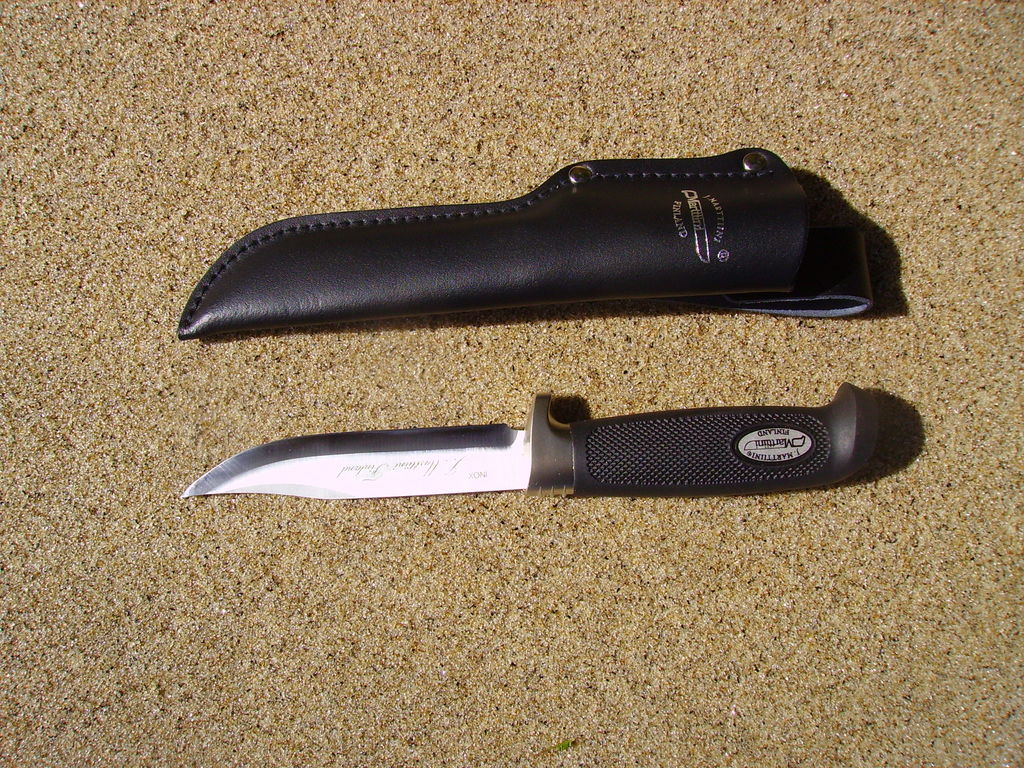 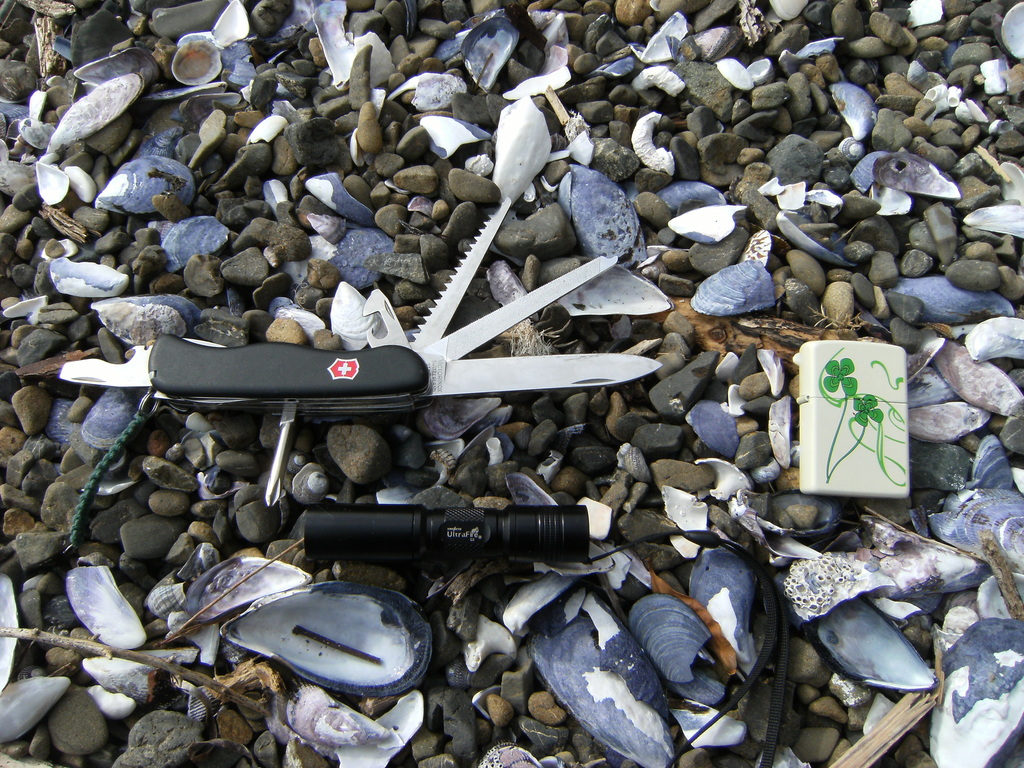 ShrafterPermalink Reply by Scott Hamilton on November 6, 2010 at 18:43
I own the sak deer hunter, locking blade and saw etc but a gut hook rather than a can opener. Funny thing is I keep looking at the locksmith knife, thinking that a metal saw/file could come in useful, do you use it much?

TohungaPermalink Reply by Te Hopo on November 6, 2010 at 19:04
Mate, the Locksmith is my EDC knife, I go NO WHERE without it.
Most of the time it lives in a sheath on my belt.
If I ever lost it, I'd be ordering one the next day.

I looked at a lot of Victorinox models before deciding on the Locksmith, the hunter model did catch my fancy but only cause of the green scales with the deer logo, I never bother with gut blades as I've butchered enough animals that it's second nature now.

One model I will be getting in the future is the Rescue model seeing as I need another for my ERT work as my Leatherman isn't one handed opening.