Hello everyone, I'm very excited to tell you about a project Jeff Cameron and I have been working on recently. It's still a work in progress and we would like all of your input in the final stages.

Basically there are different statuses that each member can progress through, and they can only have one at a time. The idea is that everyone starts off as Newbies, then progress up levels as certain skills are demonstrated (by video upload, showing the group at a get together, etc). Skills could be different types of firecraft, shelter building, knife skills, etc.

There are 3 levels to climb, which have temporarily been named level 1, 2, and 3. (So original!). There is also a Administrator status.

Questions to the group:

1) What should the syllabus of skills be at each level?

2) How should members submit the "evidence"?

2) What are good names for these three levels? Something bushcraft/outdoors/nz related.

Here is how you can see the member categories under the Members tab: 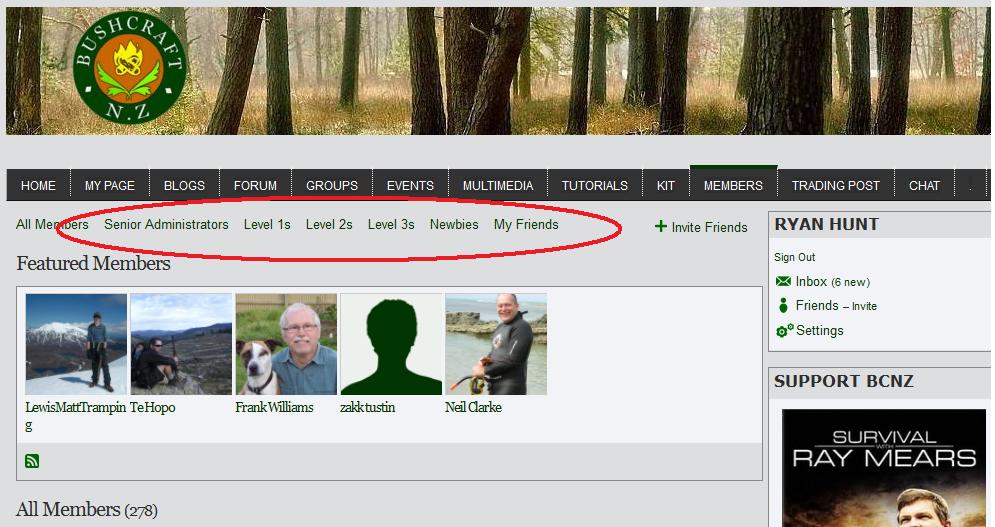 Haha nice one John, I'll pass on that one.

How about we table the skillls submission for now and I come up with a separate system that allows members to earn badges, or something like that.

For now, I have ties the 3 different levels to the profile questions people answered when they joined the site. These can be changed by members themselves in their profile.

We can change the names/icons later.

How does everyone like this? I have made these changes live.

I better go look at my profile...lol

Hey hold on here guys, I think you are starting to blow this out of proportion. This is not a national qualification, it is relevant only within our community, and only would be of interest to those that are members. I am a Scout leader and there is no way spouting out bushcraft NZ qual's would get you anywhere, also I can go anywhere and say anything about what I am qualified to do and if they do not check it, more fool them. Anyone can lie and say what they want about any qualification regardless of where it has supposedly come from. But online, I can probably get qualified as a Brain Surgeon somewhere in the world, but I bet a Hospital would not let me cut open anyones head...

My one concern with the whole newbie thing,is that it may put off people. The joining and progressing through the levels needs to be voluntary, those that do not join have no further designation and those that do should have something different to newbie. I do not know what the maori words are for baby, toddler, teenager etc but maybe these would be good terms to use. Not everyone is going to want to do this, but in 2 years time they sure as shit will not want to be called a newbie. I do like the whole idea, I even joined the Bushcraft Usa one but I just do not get the time to do any of it. If anyone wants serious Quals they can do a course through Dave Canterbury's site, at least they seem to be serious. As to the level contents, I think everyone is going to have different ideas, but I think the basics such as shelter etc should be part of each level, and that the levels should contain all of these just progressively harder. The top level should be for those who have achieved fire, food, shelter etc but in true bushcrafter style with nothing but a knife,clothes on their backs and maybe a fire steel.True Bushcraft is about what you can do with minimal gear, so a someone with a higher level should be capable of more with less. Just about anyone can build an effective shelter that will keep them warm and dry when they have a sleeping bag and tarp, and seems more like a camper than a bushcrafter to me.

I agree Scott, Blown out of proportion.

I originally proposed the idea to be like BushClass on the Bushcraft USA site as I thought a structured training program for people new to bushcraft or who had a smattering of knowledge that wanted to fill the gaps in their skill sets or for very experienced people who wanted a greater challenge.

The idea was for it to be "Opt in"

A general range of skills, not just survival but everything that encompasses "Bushcraft" including elective subjects that appealled to the indiviual.

The idea was for for people who achieved the level which was judged by senior administrators to be given some recognition, whether a physical badge and or an icon next to their name/photo.

The judging wasn't to be Anally pedantic, but it was an actual PASS/TRY AGAIN thing, something our society seems to frown upon, I personally would rather be told/shown how to do it better than try to rely on piss poor efforts in a survival situation

I know it can be hard to make this work within the framework of a website and a huge thumbs up to Ryan for his efforts in providing this site and his work maintaining it!

I know that not everyone will like the idea but if you don't then don't participate.

I am a keen hunter, have been a scout leader for many years and have been a member of the NZ Army.

I have spent weeks in the bush practising BC and am comfortable identifying many usefull plants, tracking animals, making water safe to drink and cooking over a fire, I have spent time above the snowline, been a platoon medic and signals operator. I could go on

However I don't consider myself to be an "Expert bushcrafter" because there is so much to learn as I found out from the BCUSA  Bushclass program.

I'm struggling to see how a forum status / skill based challenge award. Could be viewed as a problem or danger....

John... I do not think that for the average person it is a problem or danger but for those not "normal" I have had some experience with... And I got my Scout Group Leader ( a few years ago but no longer involved) based on my previous history, which as far as I am aware was not verified by the Scouting Association.

TohungaPermalink Reply by John Swarbrick on May 3, 2012 at 19:02
Then surely the issue sits with the vetting and verification process of any organization accepting someone who is claiming Bushcraft NZ 'advanced' status or WHY.

MSC would likey vett someone's credential before they let them start ODL..

Rather than the issue sitting with BCNZ for setting up a skills based hierarchical structure...

Have you had a look at how it works over on BCUSA?

Yes John it is hard to imagine but it can and does happen...  Not just a forum status but as Jeff states his idea was for a structured training programme.

Hey Scott. I never said it was a national qualification... But it may try to be used that way. An operator in Wairoa recently was doing this with (i believe several) realistic looking bogus qualifications. One was a Bush 3 qualification from NZMSC which doesn't exist.

Oh dear wasn't there a case in NZ recently where a Dr or Surgeon in a hospital was found out not to have any qualification? I seem to remember a minister not having the qualification stated either, and a bogus schoolteacher comes to mind too. So it does happen.

I think that if this is how people are reacting at this level, then the idea should be scrapped. Perhaps another group could be created that you have to join up with, such as the Christchurch, Wellington group etc could be created where those that want to teach can upload videos and those that want to learn can watch or upload their own attempts and people can give advice etc. The fact that this area is not open to just anyone on the WWW, may prevent and curb any embarressment etc with bad attempts and the like, it would also mean that a disclaimer could be added that is agreed to when joining this section. The status profile could just show you as a member of this or even perhaps the time you have been a member.

Seems to be that this debate is really irrelevant as no one seems to be concerned or stressing about any of the posts they have uploaded to teach others, and whether these have any ramifications, as I am pretty sure that there is no NCEA courses or quals available here that would make us qualified to teach these things.

My comments were made as concern of the Legal liabilities the site administrators may face. There is nothing more dangerous than an unknown danger! All I ask is that the admins find out first. My comments were based largely on the following meetings with a lawyer.

As part of a delegation from a kayak fishing club I visited a community lawyer to see the legal responsibilities and liabilities of the club and it's members. As a result nobody but me was willing to be a trip or group leader, and most of the committee resigned from the committee. The Club is falling apart and is in the process of becoming a network of friends. Even the Lawyer was astounded and was taking the information she collated back to a Club she was a member of. The list of liability and requirements was amazing and she found she far exceeded her free community time in the collection process. She consulted with other lawyers to make sure she was correct as even she didn't realise how far ranging the law was.

For example: you cannot legally contract out of any liability, even with a signed disclaimer! The Kayak Fishing Club asked that specific question. The legal definition of a club (and therefor a clubs liability) is frightening in what constitutes a club. If you do things that a club does it doesn't matter what you call yourself you are still legally a club and face the same legal responsibilities and liabilities.

Remember the cycle race organiser in the South Island where there was a fatality? In the end she was found not liable but it cost her her home. The farmer who had a bridge collapse on a beekeeper? Also not liable but lost his farm and family in the process of proving his innocence. All I am saying is be carefull, very careful.

I love the site and think it is amazing... But the idea of a structured (Jeff's idea) course is a new level - no mater how great the idea is. Another name for structured is formal... And while not intended to be a qualification could be taken as such by the unscrupulous and devious.

Have you heard of you tube???? Its stuffed to the brim with instructional videos of all types..